Posted on: August 1st, 2014 by hauleymusic No Comments 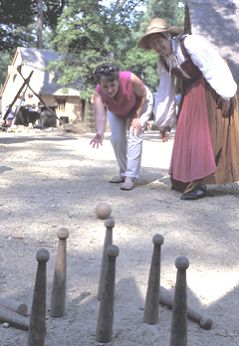 Playing ‘Nine Pins’ has been a favorite American pastime since the early days of colonial America. The history of this game actually dates back quite some time.

Objects for bowling have been uncovered in an ancient Egyptian tomb, dating back to approximately 5200 BC. Later, forms of bowling were prevalent in Europe in the 14th century.

At one time, bowling was a religious ceremony. German parishioners rolled an object at a pin which, according to the ceremony, symbolized evil. If they missed the pin, they had to do penance. In those days, the game was called Kegelspiel or Nine-pins.

By the 15th century, the game of Ninepins had evolved. Ninepins was also played in England, although it was eventually banned, being called “…a waste of time and not a fit method of pre-paring for war.”

The Dutch settlers brought Ninepins to America in the 17th century. Because of widespread betting on the game, the sport was outlawed by Connecticut in 1841, and other states soon followed. The law was avoided using ten pins.

One way to play Nine Pins, is to simply set the nine pins in a diamond formation and play the traditional game of bowling. 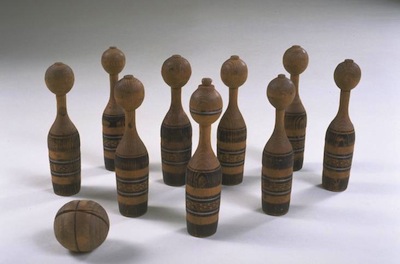 Another way of playing Nine Pins would have been to put eight pins around the slightly fancier pin with a line etched around the head in the above example. Each player rolls twice per turn, acquiring points as long as the center pin stands. It should be the last to fall. Should it fall too soon, a player loses their points and starts again. 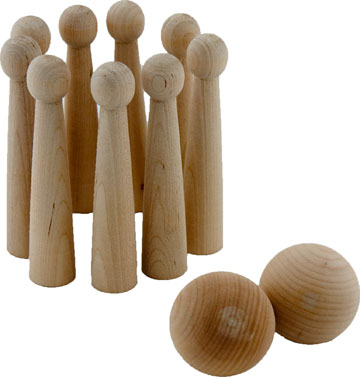 A variety of pins, balls and rules of play since ancient times evolved into the games we know today as skittles, duckpins, lawn bowls, bocce, pentanque and tenpins.

Ninepins can be played with 2 or more players. Players agree on when the game will end, usually after a specified number of rounds have been played. The object of the game is to knock down as many of the wooden pins as possible with each roll of the ball. The pins are set up on the table or floor to form a circle, a diamond or a row. A mark is then established on the floor where the players will stand while bowling the balls. Each player bowls both balls, tallies the score, replaces the pins and passes the balls along to the next player in turn.

Ninepins has been a popular sport in North America since the Dutch settlers brought it with them to the Hudson River Valley in the 17th century. Known as Dutch Pins, this game eventually became the popular ten pin game. It is one of many forms of bowling games played in Europe since the time of the ancient Greeks and Romans. In colonial America, men and women of all ages enjoyed the popular pastime of ninepins and it remained a popular sport until tenpins became well established in the 19th century. 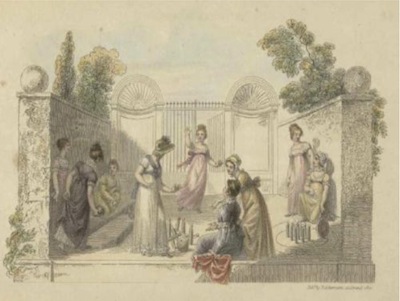 Skittles or Nine Pins has long been played in the Inns of England. The term skittle comes from the Old Norse word “skutill” meaning a bolt (short round section of a log). In general, players take turns to throw wooden balls down a lane at several wooden skittles in an attempt to knock them all over. Each player attempts to knock all the pins down in the least number of rolls.There is no doubt that Skittles has been one of the most popular sports in England since at least medieval times. Many old pictures and books mention it. A study of old pictures of the Thames Frost fairs shows that Nine Pins was consistently one of the entertainments. A snippet of a picture dated ca. 1666 showing the Thames River frozen over with a line of people crossing the ice while a game of Nine Pins goes on nearby. Another painting of the 1694 frost fair shows a similar Nine Pin game.

There are a number of skittle games across England and there have been many more in the past. In Germany, 3rd century monks played a game with a kegel which was a club carried for self-defense. In the game, the kegel represented a sin or temptation and the monks would throw stones at it until they knocked it over. The modern German term for skittles is Kegelen. 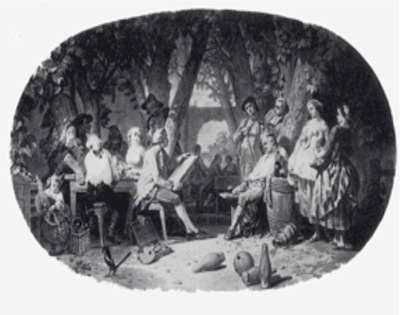 Illustrations from the 18th century show players throwing or rolling the ball while standing right next to the pins. Many games allowed the players to first aim from a distance and then take their final throw at point blank range. This last technique is called “tipping.”

Variations:
There are a number of variations on the games found in historical notes. Most likely, just as we do today, once folks had played a game for a while they began thinking of alternate things to try with the game. As such the shape of the pins used in knock down games could have different appearances…everything from simple cylinders of wood taken from a small log, to specific shapes carved out of the wood, including cones, barrel-shapes and rectangular blocks. Each shape would make the strategy of how to best strike the pins a fun challenge. Additionally, there are references to different types of balls (bowls) being used including “byassed” or “biased” balls that were flattened a little on one side so that they would roll in a spiral manner rather than straight. There were also “flat” balls that were flattened on two opposite sides (think of a miniature wheel of cheese being rolled). The purpose of these alternate shaped balls was to make the games even more of a challenge. SO…after you learn the basics of a bowling game using regular spherical balls, try using a biased ball or a flat ball when playing the game to have a fun variation.

Kayles:
Kayles derives it name from the French word “quilles” which is equivalent to the term skittle. The most standard version of this game also became known as Nine Pins. In this game, nine skittles are arranged in a 1, 2, 3, 2, 1 pattern. Players take turns standing behind a set line to roll their balls at the pins. The one who can knock all the skittles down in the least rolls wins.

Bowls:
Also known as Bocce, this game and its variations are the most wide-spread of the bowling target games. While there are modern rules with formal “courts” on which to play, most of games played up through the Middle Ages were done in a style that is today called “Open Green.” This means it may be played almost anywhere on a variety of surfaces, in the yard, on a smooth lawn or rough grass, along a dirt road or grassy meadow, on a sandy beach, on level ground or hilly terrain. Variety in surface and terrain calls for a variety in skills and techniques of play, producing a game rich in surprise and suspense.

You need two equal teams with either one, two or four persons per team. Determine in some fair manner, which team will start. Determine a “foul line” that players must stay behind when they toss or bowl their rolling balls.

Standing behind the foul line, the target ball (sometimes called the Jack Ball) is thrown out by a member of the starting team. He may toss the jack ball any distance and in any direction that he chooses. Staying behind the foul line, the same player then rolls or throws his first ball only. He then steps aside and does not bowl again until the opposing side has gotten one of its balls closest to the target ball

Then a player on the opposing team rolls and tries to place his ball nearer to the target ball. The side whose ball is closest to the target ball is called “in” and the opposing side “out”. Whenever a team gets “in” it steps aside and lets the “out” team bowl. This continues until one side has played all of its balls. Then the remaining team may toss its remaining balls, trying to gain additional points.

One point is awarded to a given team for every ball that is closer to the target ball than the closest ball of the opposing team (In the case of a tie, no points are awarded). A game is 12 points.

The team that wins a round starts play in the next round (tosses the target ball).

Balls are delivered underhand or overhand, in one of two motions: they can be tossed through the air or bowled. The ball must leave the hand before the player oversteps the foul line.

Strategies can include knocking away an opponent’s ball, knocking the target ball to change its position, and using the terrain to bank shots.

Targa:
The actual name of this game (if there ever was one) has been lost in history. This game is played just like Bowls listed above, but rather than having a moving target, a stationary target is used…usually a stake driven into the ground. Points are scored for having one’s balls closest to the target stake. A version of this game that uses “flat” balls or discs is called Rolle Bolle.

Resources and Further Reading:
Cotton, Charles, The Compleat Gamester [1674], in Games and Gamesters of the Restoration; London: Routledge, 1930.