Posted on: July 1st, 2014 by hauleymusic No Comments 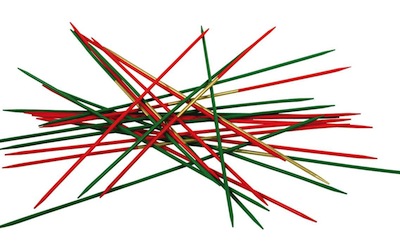 Most of us recognize this bundle of sticks as the very popular game of “Pick-Up Sticks” and most likely played it during our childhood. Just how old is this game? Stick games are ancient and prevalent in all cultures: India: c. 563-483 BC, Scythians: 450 BC, China: 12th century, Japan: 16th century.
The version played in China involved intricately carved ivory sticks and play was based on collecting the figures with the higher point value. British traders in China discovered this game, brought it back to Britain and gave it the name “Spellicans.”

When the British colonized America, they took the popular game across the Atlantic and somehow the name changed to “Spilikins.” The sticks were now being made from colored or painted wheat straw and the name changed to “Jackstraws.” Another theory is that Pick-Up Sticks was originated by American Indians and taught to westward bound pioneers. France has a version called “Jonchets,” in Sweden the game is known as “Plockepinn,” and Israel calls the game “Dukim.”

Regardless of the name, the concept of the game is quite simple: The bundle of sticks is held in one hand with the bottoms touching a flat surface. The sticks are then released to fall in a pile. The first player picks up as many sticks as possible, one at a time, without disturbing another stick in the pile. The black stick is often used as a “helper” to carefully maneuver sticks without incident.

Typically the winner is decided by the point value of different colors. Often bonus points apply for more challenging maneuvers. The rules need to be determined prior to play.

A diary by Lydia Maria Child, about the game of Jackstraws which she played as a little girl, gives us a good incite as to how children played this game in the 18th century : ”A large number of straws, or fine splinters of wood, of equal length, are placed in a pile, standing up so as to meet at the top and spread out at the bottom, like a tent, or hay-stack; two of the sticks reserved, and on these are placed little crooked pins, or some small delicate kind of hook. Each one, in turn, takes these hooks and tries to remove one from the pile, without shaking any other straw. The one who succeeds in removing a straw upon these difficult conditions, takes it to herself and counts one. Those who gain the most straws win the game. Sometimes they cut little notches, or they black the heads of three, which they call king, queen, and bishop: the king counts four, the queen three, and the bishop two.”

Jackstraws, although closely related to pick up sticks. Instead of sticks, however, jackstraws was often played with small wooden pieces carved into various shapes. The carved pieces made jackstraws much more challenging than pick up sticks, as it is difficult to remove pieces without catching them on others. Stores which specialize in games sometimes sell jackstraw sets along with other old-fashioned games, and it is also possible to make your own set.

Pick up sticks is an ancient game; various versions of it are depicted in ancient works of art and writing, suggesting that multiple cultures developed essentially the same game independently. Players of exceptional ability are those demonstrating considerably steady hands and good coordination.
If a player disturbs a stick as she or he moves, the turn is over, and play passes to the next player. Some players use this rule as a point of strategy, distracting players as they move in the hopes of forcing them to disturb the pile of sticks, creating a new arrangement which may make it easier to extract pieces.

Pick up sticks in turn was the foundation of a lot of other games, especially in China, where a game similar to pick up sticks was used for gambling, and another variant was used for divination. The precise origins of jackstraws are a bit unclear, but a version of the game appears to have become immensely popular in England, at which point it crossed the pond to the the colonies and became known as jackstraws.

The pieces in a jackstraw set are often thematically related, as for example in a set which includes farm implements like ladders, rakes, shovels, and hoes. Sometimes the pieces are carved more abstractly, with the goal being the creation of multiple jagged or confusing edges which make the game more challenging. When the jackstraws are dropped, the protruding edges of the pieces tend to lock together, making it very hard to lift out a single piece without disruption.

In addition to the jackstraws themselves, the game typically includes a helper piece with a hooked edge to help people grasp and manipulate pieces. Each piece in the game also has a point value, with more challenging pieces being worth more points at the end of the game. At the end of play, points are tallied up and the pieces can be thrown again or stored in a container for another use.