Posted on: May 1st, 2014 by hauleymusic No Comments 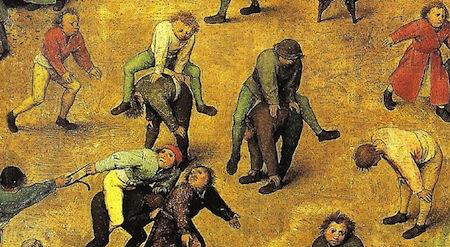 Children’s Games is an oil-on-panel by Flemish Renaissance artist Pieter Bruegel the Elder, painted in 1560. It is currently held and exhibited at the Kunsthistorisches Museum in Vienna.

Children’s Games is an oil-on-panel by Flemish renaissance artist Pieter Bruegel the Elder, painted in 1560. It is currently held and exhibited at the Kunsthistorisches Museum in Vienna.

Leapfrog is a children’s game in which players vault over each other. Games of this sort have been called by this name since at least the late sixteenth century.[1] They also played this in colonial America.

One person rests his hands on his knees and bends over, this has been called “giving a back.” The “leapfrog” places hands on the first’s back and leaps over by straddling legs wide apart on each side. On landing he stoops down and a third leaps over the first and second, and the fourth over all others successively. When all the players are stooping, the last in the line begins leaping over all the others in turn. The number of participants is not fixed.

The French version of this game is called saute-mouton (literally “leapsheep”), and the Romanian is called capra (“mounting rack” or “goat”). In India it is called as “Aar Ghodi Ki Par Ghodi” (meaning “horseleap”). In Italy the game is called “la cavallina” (i.e. “small or baby horse”). 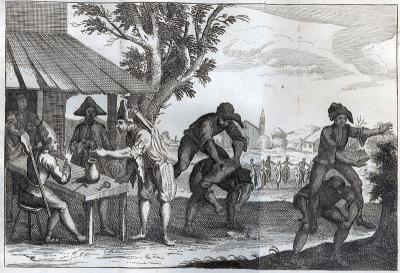 The Back – Any player who bends over to make a back for others to leap over is called the “back.” He must rest his hands on his knees or near them to make a firm back. It is against the rules for any player making a back to throw up his back or bend it lower while a player is leaping over it but each player before jumping may say “High back ” or “Low back ” which the one who is down must adjust before the jumper starts. He then must do his best to keep the back perfectly level and still unless the game calls for a different kind of play. In some games the back stands with his back toward the jumpers and in others with his side toward them. If he is to stand on a certain line he must “heel it” if with his back toward them or if his side be toward them stand with one foot on either side of the line.

The Jumper – The player who leaps must lay his hands flat on the back at the shoulders and not “knuckle ” i.e. double under his fingers. Any player not obeying this rule must change places with the back. The back must be cleared without touching him with the foot or any part of the body except the hands. Such a touch is called “spurring ” and that person must change places with the back if the latter stands upright before the next player can jump over him. If he does not stand upright in time he remains back. When a leap is made from a starting line or taw the jumper may not put his foot more than half over the line. Good jumpers will land on the toes with knees bent and backs upright not losing the balance. 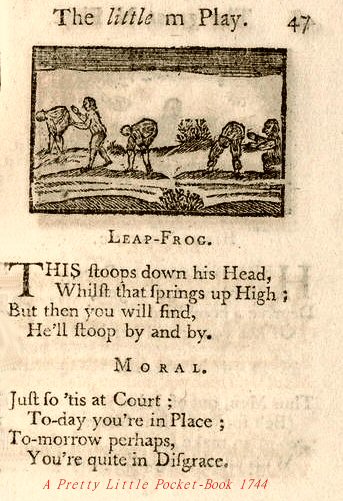