Posted on: September 1st, 2013 by hauleymusic No Comments

‘Graces’
The traditional American game of Graces, also known as ‘French Hoops’ or ‘The Flying Circle’, is an historic outdoor game, primarily designed to develop feminine grace. At one time, ‘Graces’ was also considered an acceptable boys activity. Young ladies were encouraged to play this historic game outdoors and to keep score. Young gentlemen were encouraged to play this game simply for fun. This historical game was brought to the New World from France, where it was commonly known as ‘La Grace.’ Today, both boys and girls enjoy playing the game. 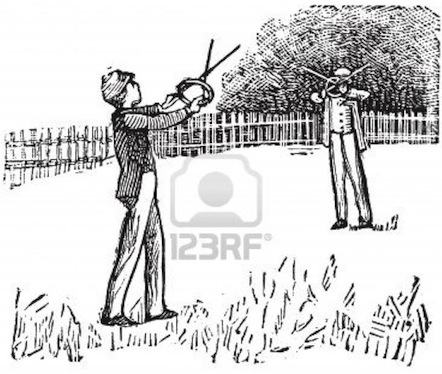 To play ‘Graces’, two players stand directly opposite one another, approximately 10 feet apart. Each player begins with 20 points. One player places a hoop over the crossed wands as shown in the illustration. By quickly moving the wands apart, the hoop is sent flying toward the opposite player. The object is to catch the hoop on one or both wands and return it. The hoop is kept moving back and forth until one player misses. Each miss costs a point. The first player to use all of his/her points loses the game. After you have mastered one hoop, try tossing two hoops back and forth simultaneously.

Click here to watch a video of The Game Of Graces